Glutamate is the purest taste of umami, the fifth taste. Umami taste receptors have a special affinity for free glutamate.

The idea of umami as a basic taste was not easily accepted internationally. In 1979, Japanese scientists introduced their results to the world in a paper on “The Umami Taste” at the Joint US-Japan Science Conference. For too long, researchers had focused on only four tastes (sweet, salty, bitter and sour) and, consequently, only described four. However, this paper was an affirmation for umami as the fifth taste.

After 1982, many scientists in Japan, America, and Europe joined in the research on umami. Psychophysical and electrophysiological studies showed that umami is independent of the traditional four tastes. Furthermore, specific receptors for glutamate representing umami substances were identified in 2000 and 2002.

Now it is widely accepted that umami is the fifth fundamental taste, and the word umami is now being used universally.

Tradition of Glutamate and Umami Seasoning

Of all the foods and seasonings that are rich in glutamate, fish sauce goes back the furthest. In the Greek and Roman civilizations of antiquity, fish sauce was widely used as a seasoning.

The ruins of many large fish-pickling factories have been unearthed along the Mediterranean coastline. A seventh-century list of seasonings names this fish sauce “Garum”. Records dating back to the year 968 tell us that the Byzantine Emperor Nikephoros II entertained Pope Otto I’s messenger with roast lamb dressed with onion, leek, and Garum. Salty fish sauce can thus lay claim to more than 2,500 years of history. This makes it the oldest umami seasoning in the world.

Today, the human appetite and predilection for the amino acid taste is as strong and healthy as ever. In modern Italy, it is glutamate that contributes to the appealing taste of tomato sauces that accompany the country’s famous pasta dishes and pizzas. Glutamate is present in meat extracts (such as Bovril) in western countries and in the seaweed and dried fish, which are used to make soup stocks in Japan.

A team of scientists in the US recently discovered a unique mechanism by which certain molecules can drastically enhance the umami flavor – the savory taste often associated with protein-rich foods such as meat, cheese, and seafood. Other research has been conducted recently investigating the impact of umami flavor on appetite and subsequent satiety. 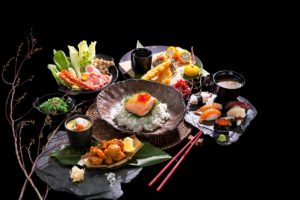 Recent research published in the international scientific journal Nutrients defines “The Role of the Japanese Traditional Diet in Healthy and Sustainable Dietary Patterns around the World.” The study’s authors delineate why the Washoku eating plan and its umami flavor properties could have a positive impact on “global growth in the prevalence of obesity, overweight and lifestyle-related non-communicable diseases.”

The researchers conclude: “The Japanese traditional diet (Washoku), which is characterized by high consumption of ﬁsh and soybean products and low consumption of animal fat and meat, relies on the effective use of umami taste to enhance palatability. There may be a link between Washoku and the longevity of the people in Japan [Japan is among the nations with the highest average life span for both men and women]. Thus, Washoku and umami may be valuable tools to support healthy eating.” (ref.: Nutrients 2018, 10 (2), 173; doi:10.3390/nu10020173 )

Umami is one of the 5 basic taste qualities. The umami taste of L-glutamate can be drastically enhanced by 5’ ribonucleotides and the synergy is a hallmark of this taste quality. The umami taste receptor is a heteromeric complex of 2 class C G-protein-coupled receptors, T1R1 and T1R3. Here we elucidate the molecular mechanism of the synergy using chimeric T1R receptors, site-directed mutagenesis, and molecular modeling. We propose a cooperative ligand-binding model involving the Venus flytrap domain of T1R1, where L-glutamate binds close to the hinge region, and 5’ ribonucleotides bind to an adjacent site close to the opening of the flytrap to further stabilize the closed conformation. This unique mechanism may apply to other class C G-protein-coupled receptors.

Recent advances in the understanding of the biology of taste have found that distinct cell receptors are tuned to detect each of the five basic tastes: sweet, sour, bitter, salty and umami. These receptor cells function as dedicated sensors, helping us to recognise and distinguish key dietary components.

The receptors and cells for mammalian taste

The emerging picture of taste coding at the periphery is one of elegant simplicity. Contrary to what was generally believed, it is now clear that distinct cell types expressing unique receptors are tuned to detect each of the five basic tastes: sweet, sour, bitter, salty and umami. Importantly, receptor cells for each taste quality function as dedicated sensors wired to elicit stereotypic responses.

Impact of MSG on eating behavior, appetite and satiety:

What this study adds:
“In sum, our study suggests that MSG intake as part of a preload is associated with an enhancement of cognitive executive processes, speciﬁcally in the domain of inhibitory control and in women with vulnerability to obesity.” The researchers also noted, “Altogether, these results, while preliminary, suggest potential facilitating effects of glutamate (MSG) on cognitive executive processes that are relevant for the support of healthy eating behaviors and food choice.”

Why this is important for us:
Researchers found that consuming a broth rich in umami — or savory taste — can cause subtle changes in the brain that promote healthy eating behaviors and food choices, especially in women at risk of obesity.

Next topics to evaluate:
The study authors noted: “Our study replicated previous research that showed less intake of high-fat food following a preload with MSG, in association with disinhibition or frank overweight/obesity.” “More research is needed to confirm and replicate these findings.”

Impact of MSG together with IMP on food flavor, appetite and subsequent satiety

Why this is important for us:
This is the first time that researchers show a two-phase effect for MSG and IMP in a high energy high protein soup. First, umami flavor stimulated hunger because the soup with umami has a higher palatability, but after, the same umami flavor induces a lower intake of the subsequent test lunch. Moreover, it seems as IMP amplifies the umami signal and induces a more robust satiety than MSG alone in the presence of protein.

The authors of this ground-breaking study concluded, “To our knowledge, this is the first study to report a biphasic action of MSG/IMP and implies that increased liking at one eating occasion can lead to better regulation at the next eating occasion.”

Next topics to evaluate:
The study observed MSG satiating effects 45 min after the intake of the soup. This suggests that the effect of MSG and IMP occurs at the early stages of digestion probably by signaling umami receptors in the gut. And although it is not certain yet how MSG and IMP have satiating effects, they may encourage slower transit of food through the stomach or what is called gastric emptying like protein does.

Impact of MSG on subsequent energy intake and food choice

What this study adds:
Monosodium glutamate (MSG) and inosine monophosphate-5 (IMP) are known flavor enhancers for umami taste. The objective of this study was to test additions of MSG and IMP in a low-energy chicken flavor broth preload on subsequent appetite ratings, energy intake and food choice.

The researchers concluded:
“Results suggest a potential role of MSG addition to a low-energy broth preload in subsequent energy intake and food choice.”

What this study adds:
This study investigated the effects of adding monosodium glutamate (MSG) to carrot soup with or without whey protein, on subjective appetite, food intake (FI) and satiety hormones in healthy young men.

Why this is important for us:
This study provides support for the hypothesis that MSG in the gut signals protein consumption.

The researchers concluded:
“MSG increased fullness and reduced desire to eat, as well as subjective appetite, and when added to protein decreased blood glucose and increased insulin and C-peptide.”

Our Tongues Sense What Nutrients are Needed

The discovery that many of the same taste receptors present on the tongue also exist throughout the digestive system suggests that these receptors may play a role in regulating appetite and satiety.