It has been established that umami, which is the taste of monosodium glutamate, is one of the five recognized basic tastes.

The umami taste is often described as a meaty, broth-like, or savory taste, and is independent of the four traditional basic tastes — sweet, sour, salty and bitter. 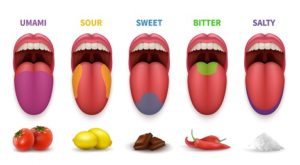 The appreciation of taste starts with the taste receptors on the tongue. Taste receptors are on microvilli of taste bud in papillae, which are on the rough side of the tongue. Taste buds are small sensory organs composed of several taste cells, which react to taste stimuli. A stimulus reaches the microvilli of the taste cells within the taste buds through the pores on top of the buds. With the activation of these taste cells, a message is transmitted to the brain via the nerves.

Recent studies on taste physiology have been providing us with new knowledge on the mechanisms for taste reception. During eating, taste substances, including glutamate, are received by the receptors on our tongue. There are separate systems for receiving each basic taste. When receptors receive taste substances, such as glutamate, sucrose or caffeine, taste information is transferred to the brain, as a result we are able to recognize the different tastes.

In 2000, a research group in the US discovered a receptor, metabotropic glutamate receptor type 4 variant (mGluR4), for glutamate on the tongue. Since, then many researchers around the world have found and identified new receptors for umami.

In 2006, a Japanese research team found that there were glutamate receptors, particularly metabotropic glutamate receptor type 1 variant (mGluR1), in the stomach tissue. As the umami taste sends signals to the brain through the taste nerves after activation of its receptors on the tongue, umami receptors in the stomach also send signals to the brain via the vagus nerve. The vagus nerve is the nerve that transfers sensory information of ingested foods from various alimentary organs, including the stomach, to the brain to regulate digestion of food. Upon receiving those signals, the brain responds by preparing the stomach for the digestion of food taken into the body via other nerve fibers of the vagus.

A similar response to umami occurs in the pancreas that also prepares for digestion in the small intestine under the central command of the brain.

The umami taste is often described as a meaty, broth-like, or savory taste, and is independent of the four traditional basic tastes — sweet, sour, salty and bitter. It has been established for more than 10 years now that umami, which is the taste of monosodium glutamate, is one of the five recognized basic tastes.

Think about the taste of a tomato. Almost no one can identify the taste of umami in tomatoes, but umami is one of several important components. When combined with the sweet and sour notes and a little earthy flavor, umami gives tomatoes their delicious taste. As a tomato ripens, the natural content of glutamate increases and the tomato becomes more tasty.

Similarly, as cheese matures, there is a significant increase in glutamate which contributes to the taste. For example, the bouillon-like taste is an indispensable component of Emmental cheese. There is also a large increase in the glutamate content of ham as it is cured.

How are chefs around the world creatively using umami to enhance their recipes? Read “Chefs Around the World Praise Umami.”