Benefits of Umami in Foods Demonstrated by Chef Chris Koetke

The American Academy of Nutrition and Dietetics recently celebrated its 100th-anniversary Food Nutrition Conference and Exhibition (FNCE) in Chicago, Illinois. Several members of the International Glutamate Information Service were there attending sessions and participating in discussions with dietitians and food science professionals. 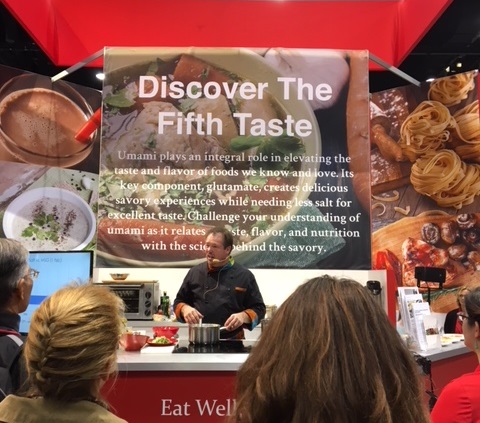 Chef Christopher Koetke was one of the distinguished chefs conducting cooking demonstrations and food sampling. Chef Koetke’s presentation focused on building flavor in prepared foods, and specifically the unique benefits of umami in foods.

Chef Koetke is Vice President of both the Kendall College School of Culinary Arts and Laureate International Universities Center of Excellence in Culinary Arts. He has worked in some of the world’s finest kitchens. He is a certified executive chef and certified culinary educator by the American Culinary Federation.

During his presentation, Chef Koetke noted, “Umami is our recognizable taste for protein.” He briefly explained the discovery of umami over 100 years ago and described how umami receptors were eventually discovered on human tongues long after the umami flavor was isolated from food sources.

One thing Chef Koetke emphasized was that although the umami (savory) flavor can be found in a wide variety of foods (such as mushrooms, tomatoes, parmesan cheese, fish sauce, miso), these foods come with flavors that may or may not be desirable in a recipe, such as bitterness or tanginess. So, he explained, the purest way to attain the umami flavor in foods exclusively is with MSG (monosodium glutamate).

“As a chef, I focus on umami just as I also pay attention to the other 4 basic tastes when building a dish. When thinking about incorporating umami flavor into a recipe, there are two basic paths I can take. I can add umami along with other flavor profiles, or I can add it in its pure form. If I choose the first technique, I can reach for umami rich ingredients like soy sauce, miso, aged cheeses, cured meats, anchovy, fish sauce, sauerkraut, etc. When I use these ingredients, I get a big umami boost and a host of other flavor compounds which will ideally complement the recipe. If I choose the second umami technique, I simply add monosodium glutamate. MSG is the ingredient responsible for umami whether it is in a particular food or if it is on its own. When MSG is added to a recipe, the umami taste simply goes up in the same way that a sprinkle of salt increases saltiness.”

The chef had the audience try three types of beef broth: one had no seasonings, one had just salt seasoning and one had his favorite MSG and salt mix (1/3 parts MSG to 2/3 parts salt). Drinking the three differently flavored broths in succession allowed the audience to truly compare the flavor impact MSG provides. The audiences unanimously favored the third broth, demonstrating that MSG can be used effectively to reduce salt in recipes, with no loss in palatability. The audience felt the same way after trying different versions of a beef bourguignon recipe, and they preferred the version that had the salt reduction using MSG. 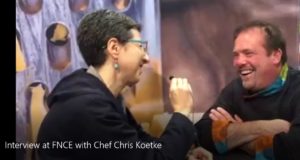 Here is a short video of a fascinating interview with Chef Koetke at FNCE, by IGIS Secretariat Ana San Gabriel.

The new Umami brochure, “Umami: The Science and Lore of Healthy Eating,” published by the American Dietetic Association, was also featured at the conference.Read more about it.