2021 — The International Glutamate Information Service (IGIS) held an interactive webinar on June 25 2021, focused on the health impact of excess sodium consumption, reasons and methods for sodium reduction, and the important role of MSG as a sodium reducer in foods.

This important health and nutrition webinar focused on the public health impact of using MSG (monosodium glutamate, umami seasoning) as a sodium reduction tool. The reduction of sodium intake is a major health concern worldwide. Although specific recommendations and actual sodium intakes vary slightly from country to country, excessive sodium intake is prevalent worldwide. Reducing salt intake has been identified as one of the most cost-effective measures countries can take to improve population health outcomes.

Experts addressed the worldwide health recommendations regarding the need to reduce sodium in the diet, as well as the latest research and food applications of MSG for sodium reduction. Dr. Beauchamp, the first presenter, is Distinguished Member, Monell Chemical Senses Center, as well as Emeritus Director and President of Monell. Dr. Soo-Yeun Lee, the other presenter, is Professor of Food Science and Nutrition at University of Illinois.

Read a summary of the webinar and download the presentations here. 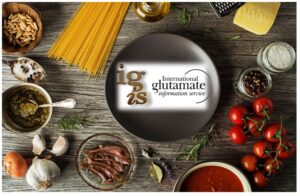 2020 — The discovery of Umami Seasoning is commemorated every year on July 25th, which is the day Professor Kikunae Ikeda of Tokyo Imperial University way back in 1908 submitted his patent application for the mass production of umami seasoning. Professor Ikeda started his experiments to identify the source of the distinctive “savory” taste. He found that glutamate (which he first identified in kelp) had a distinctive taste, different from sweet, sour, bitter and salty, and he named this taste “umami”. He was the first inventor who developed a process to produce a pure umami seasoning, that ended up being known by its chemical composition, monosodium glutamate or MSG.

Read a program description, speakers’ bios, and a summary of the webinar here. 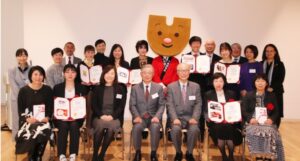 2019 and 2020 — The Japan Umami Seasoning Association (UMAJ) recently presented awards to winners of the Fourth Annual Umami Seasoning Utilization Contest, where participants created local dishes using umami seasoning to reduce sodium content. The sponsors of the competition included the Ministry of Agriculture, Forestry and Fisheries and the Japan Dietetic Association. Prior to the competition, participants did vast research on the local dishes they created, so their awards were well-earned.

The winning dish in the 2020 contest for the best “Low-salted Japanese Local Traditional Dish using Umami Seasoning”, awarded December 12, was steamed chicken rice. The second place prize went to a dish of sushi wrapped in bamboo leaves. The sushi dish typically has a high salt content for preservation. In fact, it was the sushi that samurai warriors brought to the battle field. In this updated recipe, the recipe creator used MSG and seasoning instead of salt, so at the end the salt was reduced by up to 53 percent without affecting the overall taste. 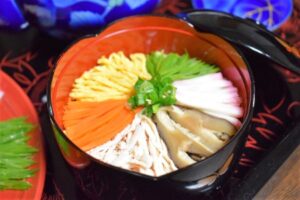 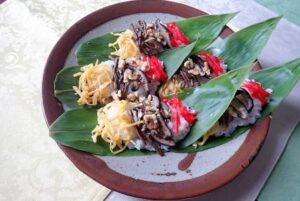 The winning dish in the 2019 contest was a delicious Aichi Gohei-mochi, which is a grilled rice cake that is coated in a miso paste sauce and served on a stick. The second prize was awarded to a mother and daughter from Okinawa – a soup with soybean powder. Both dishes had a 30 percent sodium reduction, using MSG to help reduce sodium and enhance the flavor. 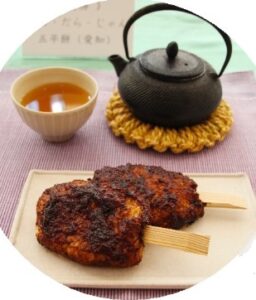 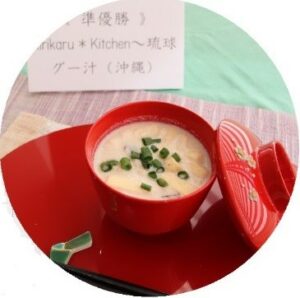 More details from the 2020 contest are on the Japan Umami Seasoning Association (UMAJ) website here, and from the 2019 contest here. 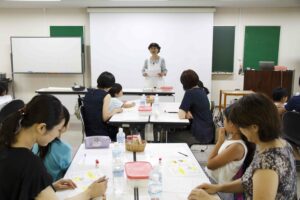 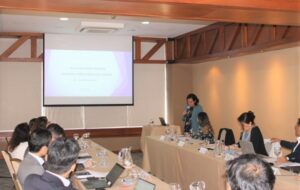 Also, Professor Sara Rosas Díaz delivered a lecture at the Universidad Peruana Los Andes (UPLA) – Huancayo, addressing the role of glutamate in weight control and appetite control. Demonstrating the value of Umami Workshops, she noted that based on a survey of nutrition students at one workshop she conducted the “positive relationship of MSG with glutamate” grew from 21% to 79%.

On November 4, 2019, Chef Walter Díaz spoke to 100 gastronomy students of Inteci institute and explained the importance of umami and its influence on oriental cuisine. The fifth taste, umami, was also discussed in many South American mass media publications including “Expreso,” “El País” and “Panamericana.”

On social media, umami was also a trending topic that was expected to reach an audience of 130,000 foodies.

Participants at this Scientific Symposium during FENS 2019, sponsored by IGIS, discussed the importance of umami taste as it affects food preference and umami’s role in promoting healthy and balanced diets.

The IGIS symposium was part of the 13th European Nutrition Conference, known as FENS 2019, organized by the Federation of European Nutrition Societies October 15-18 in Dublin, Ireland. FENS 2019 explored perspectives on “malnutrition in an obese world” among 2,500 delegates attending.

Experts at the symposium addressed molecular and physiological mechanisms of taste perception, and specifically umami taste perception and umami’s role in regulating appetite.

Umami Symposium: MSG and Perception of the Umami Taste

May 2019 — The “Workshop on Monosodium Glutamate and Umami Taste Perception: Nutrition and Central Control Mechanisms” was held at the University of Campinas (UNICAMP) in São Paulo, Brazil. This workshop is an achievement of the School of Food Engineering (FEA) which includes the Food and Drug Toxicology Group (GTAF), in association with the Center for Research on Obesity and Comorbidities (OCRC) of the Institute of Biology (IB). 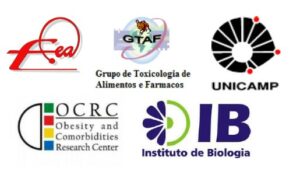 The workshop’s objectives were to: 1) strengthen knowledge among scientists about glutamate’s physiological and biochemical functions in the body, and 2) increase knowledge in the area of food safety, particularly in matters related to the safe use of monosodium glutamate (MSG) as a food additive and its role in umami taste (the fifth basic taste).

Read more about the Umami-MSG Workshop at UNICAMP.

Umami, in celebration of the 110th year since its discovery, was the focus of the World Umami Forum, which took place in New York City, September 20-21, 2018.

The research on umami started as early as the 1900s, with Dr. Kikunae Ikeda finding the substance responsible for the taste in the broth of kelp (kombu in Japanese). With extraordinary insight, Dr. Ikeda recognized that this taste was common to the taste of the tomatoes and asparagus he ate during his stay in Germany. Also, he wanted to contribute to society by improving the nutrition of the Japanese people. In an exceptional purification process, he found that the component responsible for the taste of the soup from kelp was glutamate and called this new taste “umami,” which is also known in English as savory taste. With his remarkable skills in chemistry, he succeeded in transforming glutamate from kelp into an easy-to-use seasoning that was rich in umami taste. In 1908, he was granted a patent for the method to manufacture the umami seasoning, which soon became popularly known as MSG (monosodium glutamate).

In commemoration of this significant achievement, the inaugural World Umami Forum gathered food science experts, renowned researchers, journalists, registered dietitians, and culinary professionals from all over the world to share many aspects about umami taste. Participants were familiar with umami but achieved a better understanding and appreciation of the taste and its essential role in cuisine. 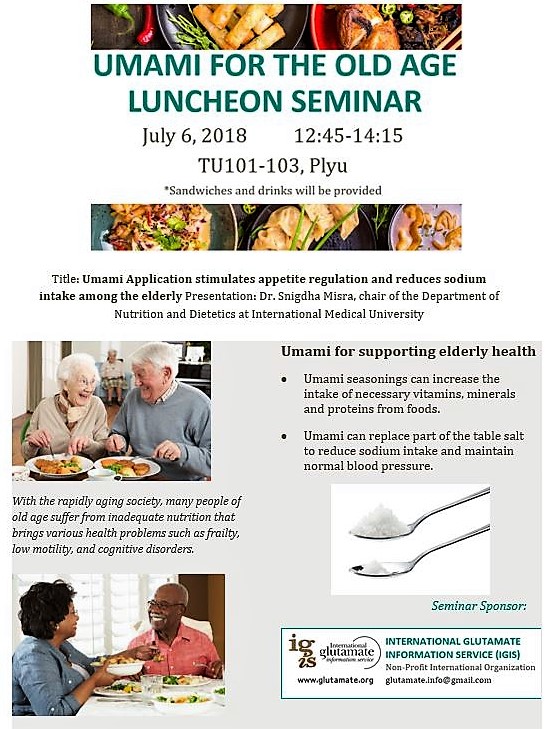 July 2018 — Umami, known as the savory taste, was discovered more than a century ago, yet recent research continues to document the many benefits of umami. Currently underway is a year-long recognition of umami’s 110th anniversary since its extraordinary discovery in 1908.

At one event this year, participants at the Asian Congress of Dietetics in Hong Kong discussed this latest umami research. The unique benefits of umami, including umami’s dietary significance, were addressed during an Asian Congress of Dietetics (ACD) lunch symposium on Friday, July 6. The umami symposium tied in directly to the theme of the 7th ACD, which was “The Rise of Nutrition and Dietetics in Asia.”

The principal speaker at the lunch symposium was Dr. Snigdha Misra, who is chair of the Department of Nutrition and Dietetics at International Medical University, in Malaysia. Dr. Snigdha presented her latest research demonstrating that umami improves the palatability of foods and stimulates appetite regulation, including the role of umami in supporting nutrition among the elderly. Dr. Snigdha also discussed how foods with umami seasonings are effective in reducing sodium intake and can help maintain normal blood pressure, especially among the elderly.

Read more about the 7th Asian Congress of Dietetics Symposium.

March 2018 — One hundred ten years after its discovery, umami celebrated its birthday in New Orleans during the annual meeting of the American Chemical Society, on March 18, 2018. Rather than cake and ice cream, the “110th Anniversary of Umami Symposium: Past, Present, Future” featured a range of renowned scientists and historians from the U.S. and Japan who shared both factual and cultural commentary about umami, the 5th taste. Misconceptions about monosodium glutamate (MSG), which some have called “the purest form of umami,” also were addressed.

Read more about the 110th Anniversary of Umami Symposium.

Benefits of Umami in Foods Demonstrated by Chef Chris Koetke

October 2017 — The American Academy of Nutrition and Dietetics recently celebrated its 100th anniversary Food Nutrition Conference and Exhibition (FNCE) in Chicago, Illinois. Several members of the International Glutamate Information Service were there attending sessions and participating in discussions with dietitians and food science professionals.

Chef Christopher Koetke was one of the distinguished chefs conducting cooking demonstrations and food sampling. Chef Koetke’s presentation focused on building flavor in prepared foods, and specifically the unique benefits of umami in foods.

Read what Chef Koetke says about building a dish with umami.

October 12 2016 — This symposium was held in Egypt at Cairo University (Food Science Department, Faculty of Agriculture). It is the first symposium on Umami and Glutamate to be held in Egypt. 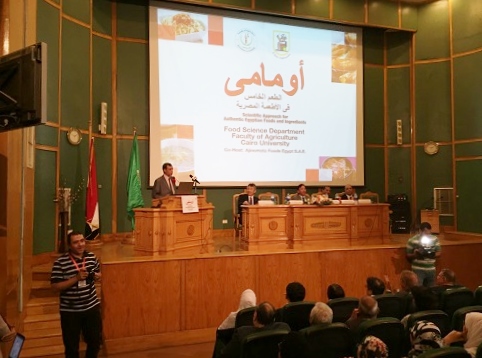 The umami symposium covered basic information about umami, including its history, science and food applications, as well as the use of monosodium glutamate (MSG) as the purest form of umami. During the seminar, more than 250 attendees experienced the powerful effect of umami seasoning (MSG) to improve the deliciousness of low salt vegetable soup.

Umami, which has been documented as the fifth basic taste, is not well understood in Egypt. Participants learned about the hidden benefits of umami in Egyptian dishes and specifically learned how MSG can impart the delicious taste in many foods.

Participants tasted a low salt vegetable soup (containing 0.3% NaCl) to evaluate the change in taste quality and acceptance when umami seasoning (MSG) was added to the soup. The soup with MSG added was widely accepted as being the most desirable because of improved taste: 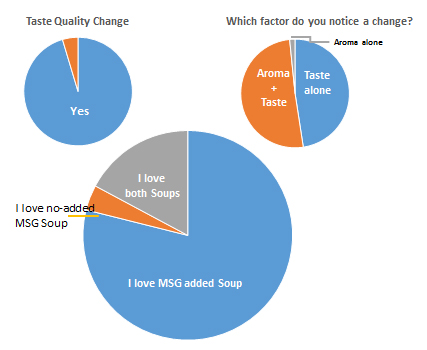